this is a test of pageagagag

“Turtles all the way down” is an expression of the problem of infinite regress. The saying alludes to the mythological idea of a World Turtle that supports the earth on its back. It suggests that this turtle rests on the back of an even larger turtle, which itself is part of a column of increasingly large world turtles that continues indefinitely (i.e., “turtles all the way down”).

The exact origin of the phrase is uncertain. In the form “rocks all the way down”, the saying appears as early as 1838.[1] References to the saying’s mythological antecedents, the World Turtle and its counterpart the World Elephant, were made by a number of authors in the 17th and 18th centuries.[2][3] This mythology is frequently assumed to have originated in ancient India and other Hinduist beliefs.

The expression has been used to illustrate problems such as the regress argument in epistemology. 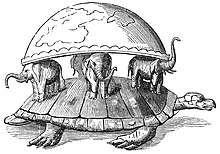 Early variants of the saying do not always have explicit references to infinite regression (i.e., the phrase “all the way down”). They often reference stories featuring a World Elephant, World Turtle, or other similar creatures that are claimed to come from Hindu mythology. The first known reference to a Hindu source is found in a letter by Jesuit Emanuel da Veiga (1549–1605), written at Chandagiri on 18 September 1599, in which the relevant passage reads:

Veiga’s account seems to have been received by Samuel Purchas, who has a close paraphrase in his Purchas His Pilgrims (1613/1626), “that the Earth had nine corners, whereby it was borne up by the Heaven. Others dissented, and said, that the Earth was borne up by seven Elephants; the Elephants’ feet stood on Tortoises, and they were borne by they know not what.”[5] Purchas’ account is again reflected by John Locke in his 1689 tract An Essay Concerning Human Understanding, where Locke introduces the story as a trope referring to the problem of induction in philosophical debate. Locke compares one who would say that properties inhere in “Substance” to the Indian who said the world was on an elephant which was on a tortoise, “But being again pressed to know what gave support to the broad-back’d Tortoise, replied, something, he knew not what”.[2] The story is also referenced by Henry David Thoreau, who writes in his journal entry of 4 May 1852: “Men are making speeches … all over the country, but each expresses only the thought, or the want of thought, of the multitude. No man stands on truth. They are merely banded together as usual, one leaning on another and all together on nothing; as the Hindoos made the world rest on an elephant, and the elephant on a tortoise, and had nothing to put under the tortoise.”[6]

In the form of “rocks all the way down”, the saying dates to at least 1838, when it was printed in an unsigned anecdote in the New-York Mirror about a schoolboy and an old woman living in the woods:

“The world, marm,” said I, anxious to display my acquired knowledge, “is not exactly round, but resembles in shape a flattened orange; and it turns on its axis once in twenty-four hours.”

“Well, I don’t know anything about its axes,” replied she, “but I know it don’t turn round, for if it did we’d be all tumbled off; and as to its being round, any one can see it’s a square piece of ground, standing on a rock!”

“Standing on a rock! but upon what does that stand?”

“But what supports the last?”

A version of the saying in its “turtle” form appeared in an 1854 transcript of remarks by preacher Joseph Frederick Berg addressed to Joseph Barker:

My opponent’s reasoning reminds me of the heathen, who, being asked on what the world stood, replied, “On a tortoise.” But on what does the tortoise stand? “On another tortoise.” With Mr. Barker, too, there are tortoises all the way down. (Vehement and vociferous applause.) 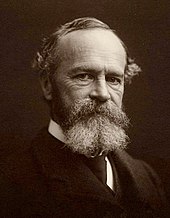 Many 20th-century attributions claim that philosopher and psychologist William James is the source of the phrase.[8] James referred to the fable of the elephant and tortoise several times, but told the infinite regress story with “rocks all the way down” in his 1882 essay, “Rationality, Activity and Faith”:

Like the old woman in the story who described the world as resting on a rock, and then explained that rock to be supported by another rock, and finally when pushed with questions said it was “rocks all the way down,” he who believes this to be a radically moral universe must hold the moral order to rest either on an absolute and ultimate should or on a series of shoulds “all the way down.”[9]

The following anecdote is told of William James. […] After a lecture on cosmology and the structure of the solar system, James was accosted by a little old lady.

“Your theory that the sun is the centre of the solar system, and the earth is a ball which rotates around it has a very convincing ring to it, Mr. James, but it’s wrong. I’ve got a better theory,” said the little old lady.

“And what is that, madam?” inquired James politely.

“That we live on a crust of earth which is on the back of a giant turtle.”

Not wishing to demolish this absurd little theory by bringing to bear the masses of scientific evidence he had at his command, James decided to gently dissuade his opponent by making her see some of the inadequacies of her position.

“If your theory is correct, madam,” he asked, “what does this turtle stand on?”

“You’re a very clever man, Mr. James, and that’s a very good question,” replied the little old lady, “but I have an answer to it. And it’s this: The first turtle stands on the back of a second, far larger, turtle, who stands directly under him.”

“But what does this second turtle stand on?” persisted James patiently.

To this, the little old lady crowed triumphantly,

In epistemology and other disciplines[edit]

The metaphor is used as an example of the problem of infinite regress in epistemology to show that there is a necessary foundation to knowledge, as written by Johann Gottlieb Fichte in 1794:[11][page needed]

“If there is not to be any (system of human knowledge dependent upon an absolute first principle) two cases are only possible. Either there is no immediate certainty at all, and then our knowledge forms many series or one infinite series, wherein each theorem is derived from a higher one, and this again from a higher one, et., etc. We build our houses on the earth, the earth rests on an elephant, the elephant on a tortoise, the tortoise again–who knows on what?– and so on ad infinitum. True, if our knowledge is thus constituted, we can not alter it; but neither have we, then, any firm knowledge. We may have gone back to a certain link of our series, and have found every thing firm up to this link; but who can guarantee us that, if we go further back, we may not find it ungrounded, and shall thus have to abandon it? Our certainty is only assumed, and we can never be sure of it for a single following day.”

David Hume references the story in his Dialogues Concerning Natural Religion when arguing against God as an unmoved mover:[3]

How, therefore, shall we satisfy ourselves concerning the cause of that Being whom you suppose the Author of Nature, or, according to your system of Anthropomorphism, the ideal world, into which you trace the material? Have we not the same reason to trace that ideal world into another ideal world, or new intelligent principle? But if we stop, and go no further; why go so far? why not stop at the material world? How can we satisfy ourselves without going on in infinitum? And, after all, what satisfaction is there in that infinite progression? Let us remember the story of the Indian philosopher and his elephant. It was never more applicable than to the present subject. If the material world rests upon a similar ideal world, this ideal world must rest upon some other; and so on, without end. It were better, therefore, never to look beyond the present material world. By supposing it to contain the principle of its order within itself, we really assert it to be God; and the sooner we arrive at that Divine Being, so much the better. When you go one step beyond the mundane system, you only excite an inquisitive humour which it is impossible ever to satisfy.

Bertrand Russell also mentions the story in his 1927 lecture Why I Am Not a Christian while discounting the First Cause argument intended to be a proof of God’s existence:

If everything must have a cause, then God must have a cause. If there can be anything without a cause, it may just as well be the world as God, so that there cannot be any validity in that argument. It is exactly of the same nature as the Hindu’s view, that the world rested upon an elephant and the elephant rested upon a tortoise; and when they said, ‘How about the tortoise?’ the Indian said, ‘Suppose we change the subject.’

References to “turtles all the way down” have been made in a variety of modern contexts. For example, “Turtles All the Way Down” is the name of a song by country artist Sturgill Simpson that appears on his 2014 album Metamodern Sounds in Country Music.[12] Turtles All The Way Down is also the title of a 2017 novel by John Green about a teenage girl with obsessive–compulsive disorder.[13]

Stephen Hawking incorporates the saying into the beginning of his 1988 book A Brief History of Time:[14]

A well-known scientist (some say it was Bertrand Russell) once gave a public lecture on astronomy. He described how the earth orbits around the sun and how the sun, in turn, orbits around the centre of a vast collection of stars called our galaxy. At the end of the lecture, a little old lady at the back of the room got up and said: “What you have told us is rubbish. The world is really a flat plate supported on the back of a giant tortoise.” The scientist gave a superior smile before replying, “What is the tortoise standing on?” “You’re very clever, young man, very clever,” said the old lady. “But it’s turtles all the way down!”

Justice Antonin Scalia of the U.S. Supreme Court discussed his “favored version” of the saying in a footnote to his plurality opinion in Rapanos v. United States:[15]

Terry Pratchett paid homage to the myth by setting his Discworld and its series of books on the back of 4 (originally 5) gigantic elephants that in turn stand on the shell of Great A’tuin, the Star Turtle, who swims through galactic space.